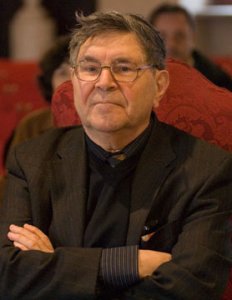 Gianfranco Poggi was born in Italy in 1934. He holds a Ph. D. from the University of California (Berkeley,1964). Throughout his career, he held positions at the Universities of Florence (1962-64), Edinburgh (1964-88), Virginia (1988-2005), the European University Institute (1995-2002), and the University of Trento (2002-2008). He has held Fellowships at the Center for Advances Study in the Behavioral Sciences and at The Institute for Advanced Study in Berlin (Wissenschaftskolleg zu Berlin). He has taught and published chiefly in two fields of scholarship: ‘classical’ social theory and the sociology of the state.

The development of the Modern State: A Sociological Introduction, Stanford University Press, 1978

Images of Society: Essays on the Sociological Theories of Tocqueville, Marx and Durkeim, Stanford University Press, 1972